As many readers would know, I work for the media and I'm a Christian. And more than a few times it's bothered me how those in the media are unfairly and ignorantly criticised by someone in the pulpit, and vice-versa, how the "church" is misrepresented by some journalist who didn't take the time to ask questions, or perhaps has unresolved issues. Some would say "they" have an agenda.

However, last week was one of those cool times when the dreaded media, in this case Hawke's Bay Today, used its influence for good, to publicise the plight of Sarah de la Haye, aka Annie de la Haye.

Sarah has cerebral palsy, moves around in a wheelchair, and with her fiance, had borrowed thousands of dollars to revamp their bathroom so she could take a shower without being helped.

Unfortunately for her - and many others - Mercy Renovators, the company doing the job, went into voluntary liquidation and she lost her deposit. Here's our first story, Hopes go down drain with cash.

As often happens - and you can never predict or expect it - people helped out via Givealittle and tradesmen came to the party and gave generously. Tradesmen offer to donate services. You've gotta love Hawke's Bay people!

As if that wasn't enough, just days later, staff at Hawke's Bay Today were gob-smacked to receive on Sarah's behalf, an anonymous gift of $1,000 in $50 notes.

Reporter Amy Shanks and I quickly drove over to Sarah's to deliver the gift, and I snapped away at her various expressions of anticipation, disbelief, absolute shock and delight as she opened the envelope.

"Ms de la Haye was in total disbelief as she pulled out
$50 notes - her face said everything words couldn't manage."
When the shock wore off she said: "whoever you are,
I can't thank you enough, thank you.""
Woman amazed at generous support

But here's the part that really touched me, as a member of the media and as a Christian. The anonymous gift came with an anonymous note:

"I too have been let down by people and been put into debt.
But God has inspired someone to put money
into my bank account to remove my debt.
So, I'm just passing on some of what He has given me.
You are one of His children, whether you believe it or not.
He has seen your situation and cares for you.
Love and Blessings."

It wasn't just Sarah that had a tear in her eye.... 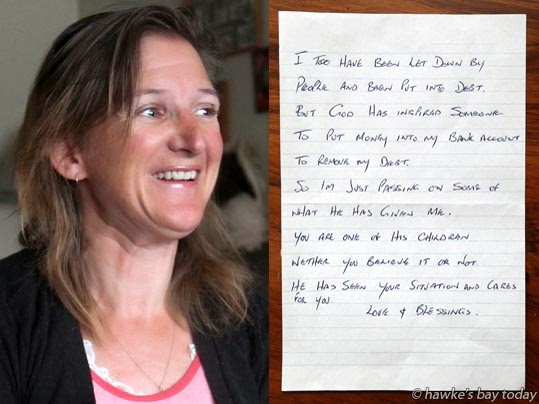