Weather-permitting, next Wednesday will see Hawke's Bay's little-fish anglers take to the rivers in their annual search for the elusive whitebait. A delectable delicacy to some, or just a hint of yuk for others, there's no denying they bring out the passion!


And it must be catching - I was sent out to get a one-off picture feature, and came back after four shoots, one at dawn (!) with a net-full of pictures, and an unexpected feature story on A Day in the Life of Jim.
[ All images are Copyright © and can be purchased from Hawke's Bay Today. ]
[ Also see the Department of Conservation's The Whitebaiter's Guide to Whitebait ]

There was once this whitebaiter...
Thursday September 04, 2008

Ask Jim Hartley of Hastings if he likes eating fish, and he'll give you a resounding "Yes!" - but only if it's whitebait - he's mad passionate about them. 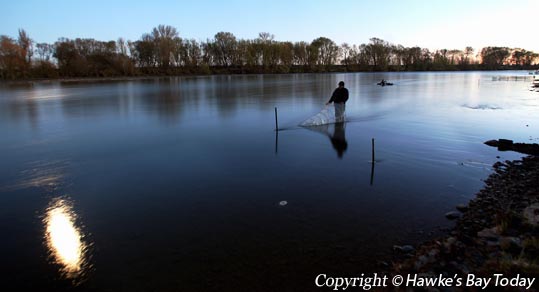 This month saw the start of the annual whitebait season, and Jim's been up most mornings at 4am to make sure he gets his favourite possy on the Tukituki River at Haumoana. 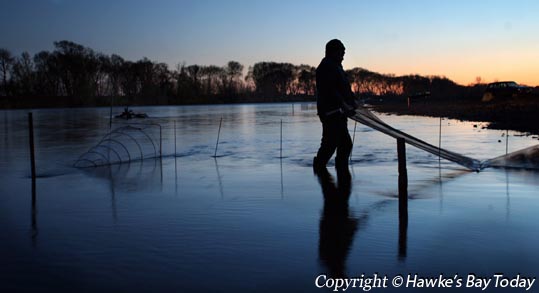 Competition is mostly friendly but fierce, and the rule on the shingle is "first in, first served, and if you're here early enough, you can go anywhere..." 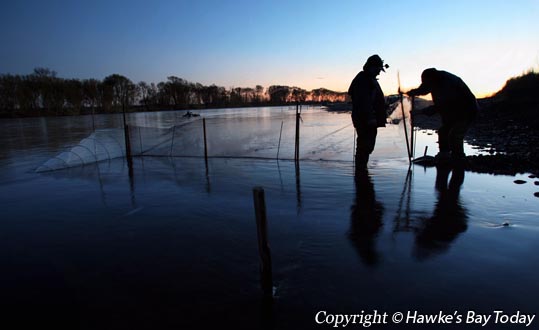 Jim's been a seasonal worker most of his 59 years, and started whitebaiting when he was 15. 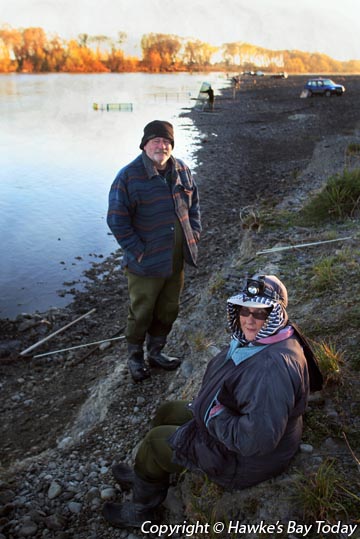 "I was walking home from school in Waitara, Taranaki, and I saw a scoop net someone had left on the riverbank, so I gave it a go... I scooped it up, and got heaps, they were all pouring out the holes, and that was it... whitebaiting's for me!" 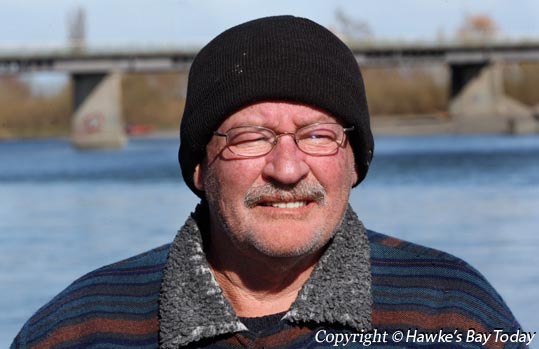 He started mowing lawns to buy his first scoop net, and then it was down to the river every day after school - he even admits to wagging school for the sake of the delicacy.

And delicacy it is... 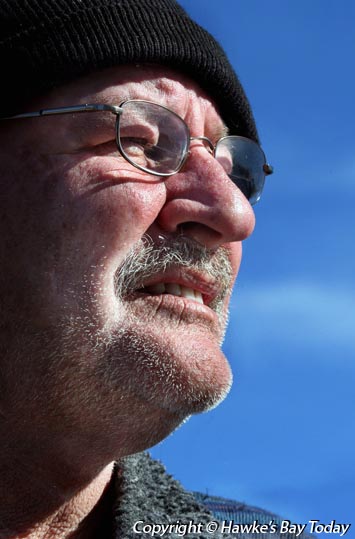 "There's no taste like it, mate... You can't beat whitebait cooked in eggs, and just a little bit of flour to hold them together... and fresh bread, its gotta be fresh, there's nothing better..." 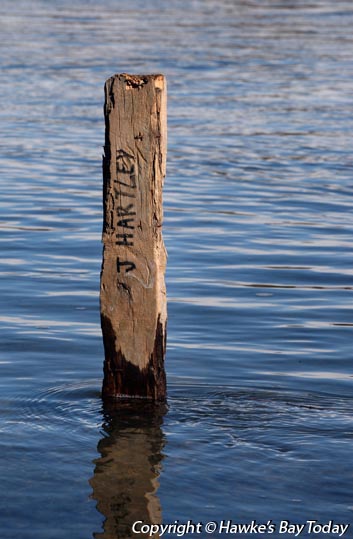 He just laughs at the people who tell him he should take off the heads and tails. "It's the flavour, mate." 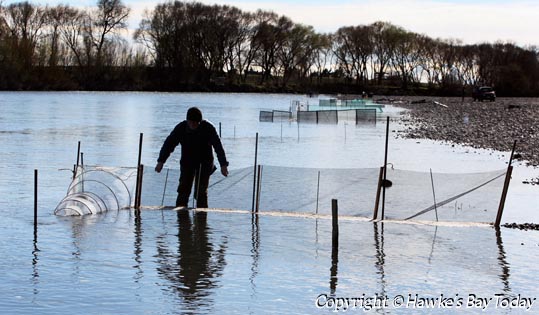 He's a bit of a purist, though. "I was giving some whitebait to a mate once, and asked him how he cooked them, and he said with herbs. 'Well, mate' I said, 'you won't be getting them off me...' " 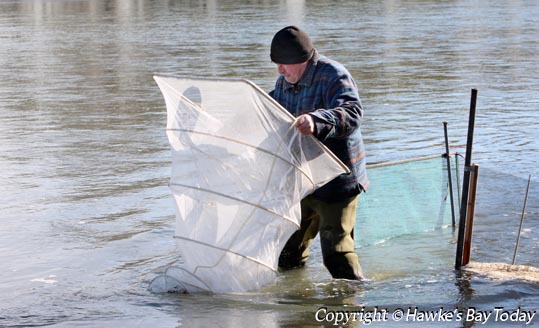 He doesn't mind so much if some people add a bit of beer, but don't even think about tomato sauce. 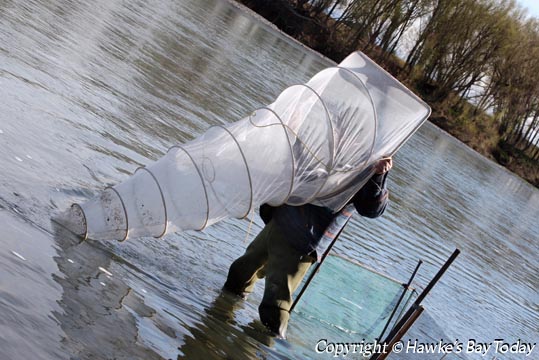 Like most fishermen, Jim's got a heap of stories, like the time he lifted a bucket and a half of whitebait under the bridge in Waitara. But unlike most fishermen, there's no bragging about the one that got away, though he did get pretty excited when he said he caught a trout last week. 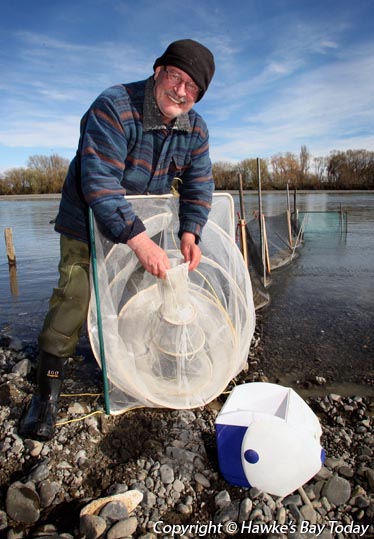 "It was this long! (about 700mm) When I first saw it, it had gone through the trap, and I could only see the tail. It was thrashing about, I thought it was an eel, and I was going 'No, No!' You aren't getting my whitebait..." 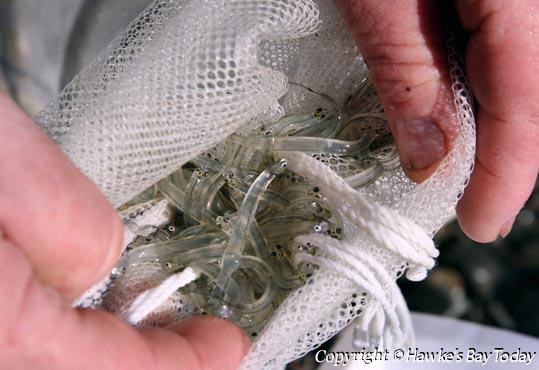 He's been a scooper for most of his life, and only discovered set nets when he came to Hawke's Bay. " I used to get a sore back, and soaking wet... Now it's just set the net, time for a sleep or a cup of tea - and they're still going in your net."

In between cups of tea and sleeping in the car, Jim checks his nets - but never while anyone is watching. 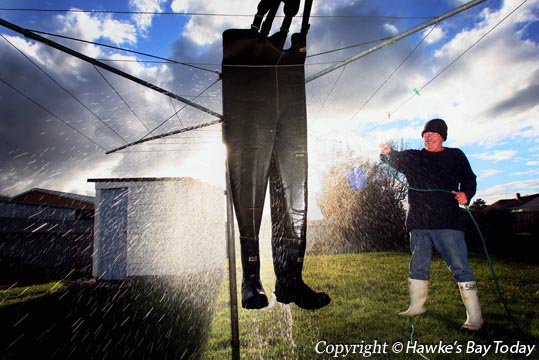 "You don't do a lift in front of anyone. If you get a big one, the next day they'll be in front of you. Last year I got real excited, and told a mate I had a big catch. Next day, I got down here, and there were 5 stands in front of me..." 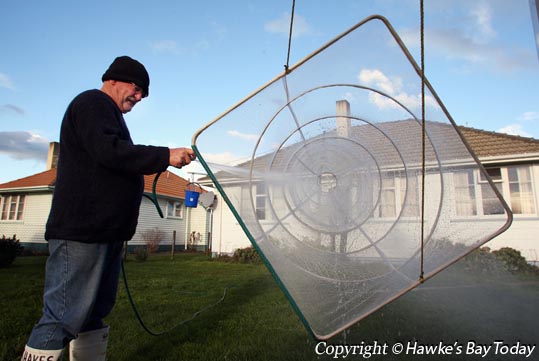 Jim's a social kind of guy, and knows everyone on the river, their names, where they're from and when they started on the river.

"You couldn't get a friendlier bunch down here, a lot are in their 60's and 70's. It's very social, there's rarely an argument." 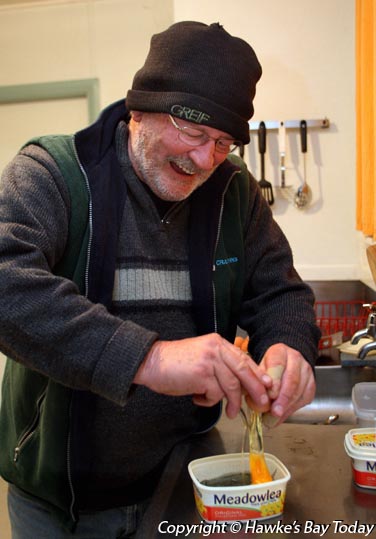 I got to meet Shirley, who comes from Haumoana in her campervan. If she heads into Clive for supplies, often she'll come back with a pie for the boys. 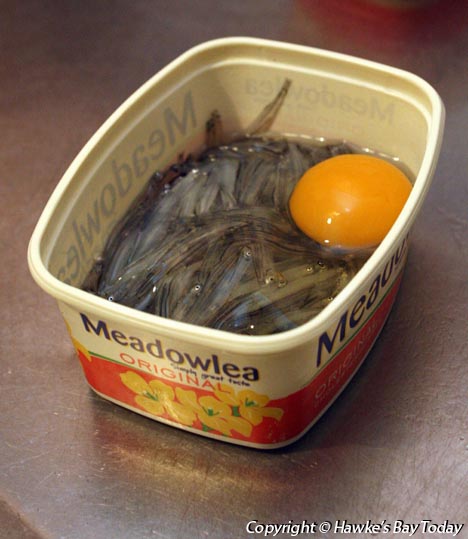 And then there's 57 year-old Dulcie from Hastings, who helped Jim set his nets the morning I was there. She'd been up since 2am and got down to the river at 3-30am. "I got excited", she enthused. 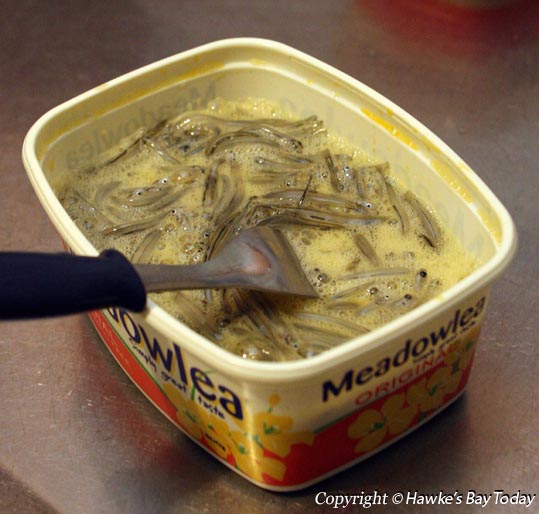 (That's not to say whitebaiting's for everyone. On Sunday Jim took along his 10 year-old daughter, Harmony. She just sat in the car, and ran the battery flat, listening to the radio full-bore.) 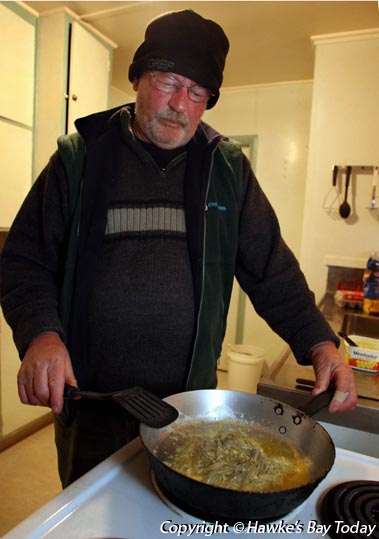 So why does Jim do it? 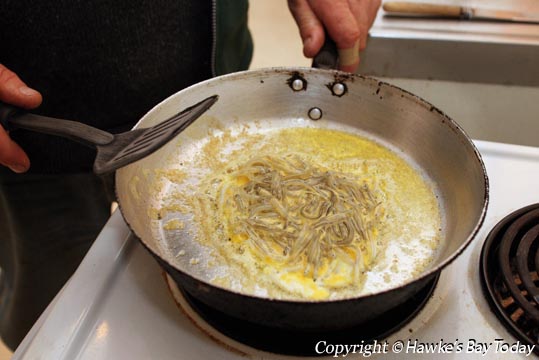 One, he's got the whitebaiting bug, and two, it's cheaper. A license costs him just $50 a year, and he can catch as many as he can carry. But go to the supermarket and, on last years prices, they'll charge him between $100 to $135 per kg. 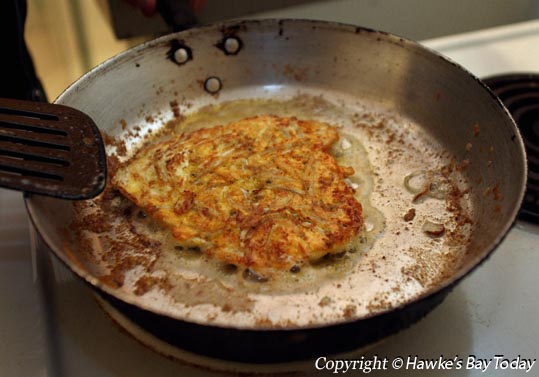 
3 Months in the Life of Jim

Dusk    pack up the net, wash the screen
head home
clean whitebait
clean net and waders on washing line
have a cup of tea
have a sleep 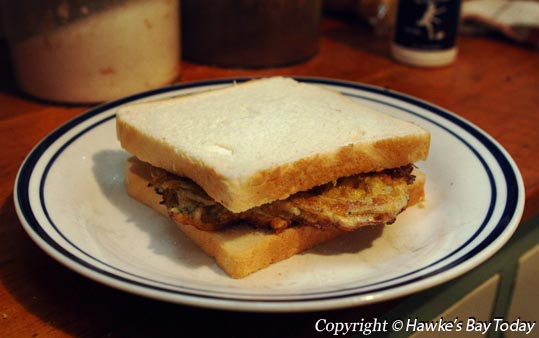