It worries me how easily people will throw their support behind party leaders from either side of the political spectrum, without first checking what they have to say on any given topic.

It irritates me that our political leaders -  and those who report and commentate - think we're all so gullible that we won't check the facts.

And it angers me that those we trust - and want to trust, and need to be able to trust - are less than straight up, and some are just plain dishonest.

I was going to have a bit of fun with this ad I found on Facebook... 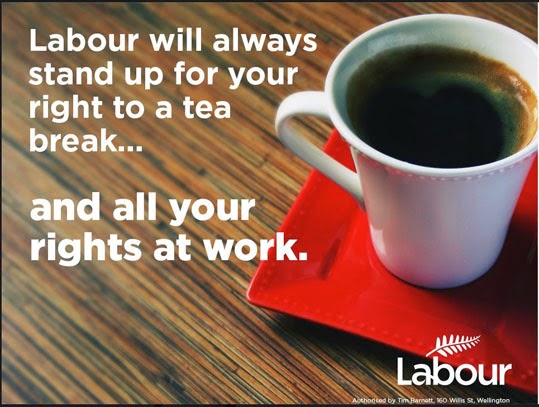 especially when I noted this in the comments...

Good for a good bit of light-hearted digging in the ribs, I thought.

But as the evening went on, I got to thinking about how David Cunliffe had introduced the post:


"The Government no longer has the numbers to pass the Employment Relations Amendment Bill. Under the proposed law, even the right to a tea break would have been cut!"

And, looking through the other comments, a lot of people were upset and right behind Mr Cunliffe for bringing the evil doings of the National Party to light.

How did I feel about it? To give a bit of background, I struggled through four years of, to put it politely, decidedly unpleasant negotiations after National introduced the Employment Contracts Act in 1991. Our national award was wiped out and the company I was working for at the time offered us an entry-level contract with many of the existing conditions slashed and insisted they were doing us a favour.

I pretty much hated the Act, though I could never quite figure whether my local managers genuinely believed they were offering us an excellent deal, or whether they were simply running the company line from their bosses in head office. Either way, a huge amount of goodwill was destroyed.

Back to today, quite frankly, if National were now planning to wipe out my rights to a smoko, that would be a biggie. While it's still not unusual for me to work an eight or 10-hour shift without a decent break, give-and-take and all that, there is some comfort in the knowledge that I can take a break if I want to. How dare you screw me any more than you already have!

But having seen a few other yeah-nah Labour announcements, I thought I'd check the facts and after spending a couple of hours in research, I found that once again, the truth was a long way from the two-second sound-bite.

There was of course a huge diversity of opinion, from politicians, reporters, columnists, professional commentators and unions. I've listed some of them below, and it's interesting to note the various ways of spinning the same story: (I've listed them in order of severity, but if that's too much reading, just read the first and the last.)


Cunliffe on Facebook: "...Under the proposed law, even the right to a tea break would have been cut!..." (source)
Helen Kelly, CTU president: "...They are also removing the tea break and lunch break..." (source) (Insert unprintable response)
A reporter's unattributed intro: "...Leaving your desk to stretch your legs, or popping out for a bite of lunch, could soon be outlawed..." (source) (Say What ????!!!!)
ONE NEWS: "...[The Government] could have got rid of the traditional smoko break..." (source) (could have?)
Paul Watson, First Union: "...put access to meal and rest breaks at risk ..." (source)
John Armstrong, NZ Herald: "...Employers will effectively be able to dictate the timing ..." (source) (Oh right, so it's just the timing, but it's still a dictate....)
Stuff: "... dictate conditions such as the timing of coffee breaks..." (source)

Anna Wallace, Wanganui Chronicle: "...an employer may impose restrictions ... where it is "reasonable and necessary..." (source) (I see two qualifiers there)
Audrey Young, NZ Herald: "...relaxes rules on meal and tea breaks..." (source)


Business NZ chief executive Phil O'Reilly: "... restore the give-and-take that existed ... before the Labour Government regulated rest breaks in 2008..." (source)
Simon Bridges, Minister of Labour: "The Bill relaxes the current over-prescriptive and often unworkable provisions ... the Bill does not override any requirements for breaks under other legislation, notably the Health and Safety in Employment Act. ... the Bill continues to protect the rights of employees ..." (source)

And here's the real reality, from a source who as far as I know doesn't have an axe to grind:
Mary-Jane Thomas, a partner at Preston Russell Law, in her column in The Southland Times: "... an employer may impose restrictions on employees' breaks where it is "reasonable and necessary" ... provided that the parties can agree to reasonable compensatory measures (such as finishing work earlier to make up for breaks not taken), and to the extent that ... the employer cannot reasonably provide adequate breaks ... employers are exempt from providing rest and meal breaks..." (source)


So in a nutshell, Mr Cunliffe, it was you, and not National, who threatened my smoko breaks and those of your 12, 359 followers on Facebook. My right to a tea break was never at risk, and you have misled me. The sad fact is, I don't have two hours to spend on all your utterances and next time I suspect I'll be less inclined to believe you.

Please Mr Cunliffe, when you next make a statement, do us all a favour, and tell it straight!
Posted by Duncan Brown